Cruisers by Antony Preston lands on the |> SALE <| shelves in my shop.

From the cover: Cruisers, although they have fought in every major naval action of the twentieth century, have always been a difficult type of ship to categorise. They fill the gap between battleships and destroyers. In the eighteenth century the term cruizer was applied to any warship on detached duty. The independent mission remained one of the cruisers tasks and the German Panzerschiff or pocket battleship of World War II was in fact an armored cruiser intended for commerce raiding. The Panzerschiff met its match at the Battle of the River Plate, when the Admiral Graf Spec was convincingly defeated by the British cruisers Exeter, Ajax and Achilles.

The cruiser also took its place in the battlefleet. Admiral Beattys battlecruisers opened the fighting at Jutland in 1916 and suffered appalling losses. In World War II the cruiser Prinz Eugen opened the action with HMS Hood and her shells may have caused the explosion which destroyed the British battle-cruiser. The naval battles off Guadalcanal in the Pacific saw American cruisers fighting their Japanese counterparts for control of this strategically-important island. In the years following World War II the cruiser rapidly declined in importance, but with the introduction of the guided missile the cruiser has regained its place in the worlds major navies.

Antony Preston, one of Britains most respected naval historians, unravels the complex history of the cruiser. His text is complemented by numerous photographs and maps. Cruisers is a book that will appeal to every naval war buff.

Very Good in Very Good Dust Wrapper. A little rubbing to the edges of the dust wrapper with a couple of small nicks along the top edge. Text complete, clean and tight.

This book will be listed, sooner or later, for £6.50 on my delightful website… (added to my Military Naval category.) but get 50% off buying from my blog… below… 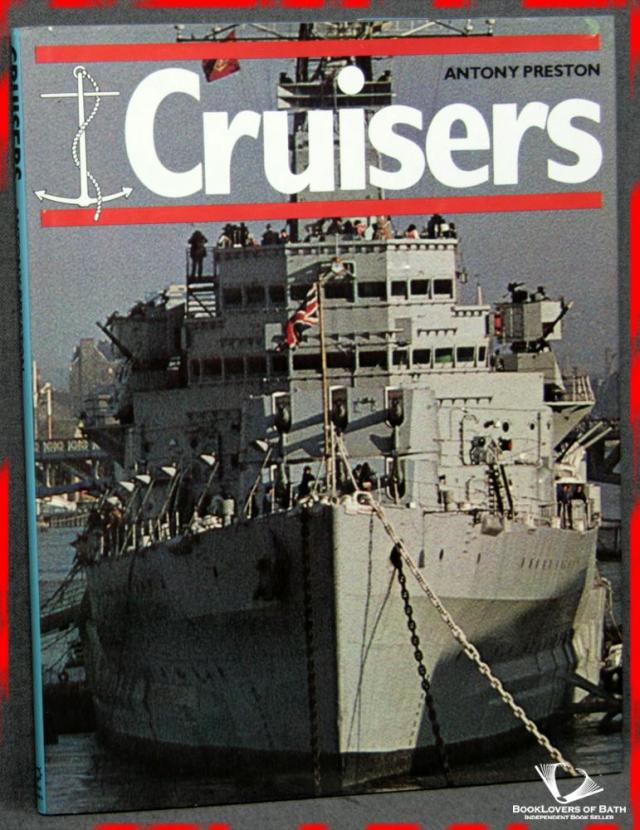