The Agony & the Ecstasy: Stephen Roche’s World of Cycling by Stephen Roche with David Walsh lands on the |> SALE <| shelves in my shop.

From the cover: On the morning after Stephen Roche became cycling champion of the world, a French newspaper wrote: We sought a successor to Bernard Hinault but, instead, we found a new Eddy Merckx. In winning the Giro dltalia, Tour de France and World Championship in 1987, Roche entered the Merckx class as only the second cyclist to win the sports three great prizes in the same season. The achievement will ensure a permanent place for Roche in cyclings heroic history but what the history books will not record are the struggles, conflicts, sufferings and satisfaction that lay behind the dedicated Irishmans great victories.

The Agony & the Ecstasy is the story of the making of a champion, from his boyhood on the Dublin streets where his passion for cycling was born and fostered by his father, through the gruelling years of trying to prove he had the talent everyone said he had. The book follows Roches growth from home-town Dublin boy into a young European, famous in every city where cycling is a major sport, and the astonishing series of wins in 1987 that were to make him a sporting legend. The Agony & the Ecstasy takes us behind the scenes of triumph and into the mysterious world of cycling to show us what life for top professionals is really like: the roads, the races and the riders themselves how they live and train; the battles with the elements on the great marathons; the crowds and their role in morale; the dangers of the sport, and the elation or despair when the finish line is reached.

Stephen Roche, one of the most likeable world champions in any sport, is articulate, perceptive and often controversial. Together with journalist David Walsh he has produced a fascinating, thought-provoking book about his own route to the summit, and an illuminating in-depth study of his sport.

Very Good in Good Dust Wrapper. Dust wrapper heavily tanned at the join of the rear panel. Leans slightly. A little rubbing to the edges of the dust wrapper. Text complete, clean and tight. 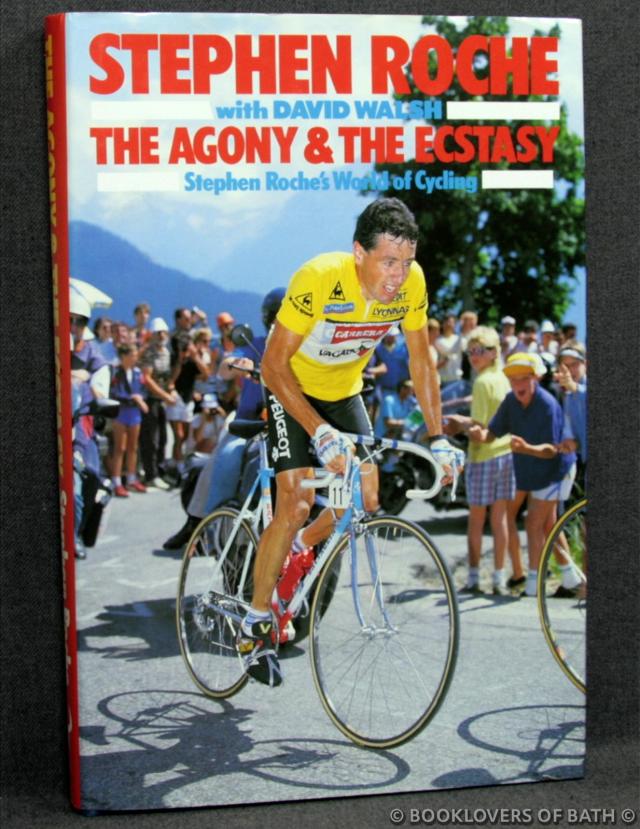