Aerial Espionage Secret Intelligence Flights by East and West by Dick Van Der Aart lands on the |> SALE <| shelves in my shop.

From the cover: In spite of the development and continuous improvement of spy satellites, which can photograph every spot on earth, the Americans and the Soviets are still spending hundreds of millions of dollars and roubles on the construction of new spy planes for secret reconnaissance missions around the globe.

The role of the aircraft in the never ending intelligence game between the East and the West remains absolutely essential.

Only a few countries possess high-altitude espionage aircraft, able to photograph large portions of the world illegally and unrestrained. Apart from this exclusive society, many more countries now use all kinds of military and commercial aircraft to eavesdrop on the radio communications of their neighbours.

The dangerous over flights of black CIA U-2 spy planes over Soviet and Chinese territories have given way to systematic electronic intelligence (ELINT) missions along the peripheries of all communist countries. Of course, the Soviet Union does exactly the same along Western borders, and nowadays in certain areas of military interest one sees a continuous parade of British, French, German, Swedish, Israeli, Italian, American and Russian electronic spies.

Such activities, although mainly over international waters, are not without danger. At only a few minutes flying time from forbidden borders even a small navigational error can be disastrous, not to mention a deliberate provocation!

A recent and horrible reminder is the shooting down by Soviet fighters of a South Korean Boeing 747 civil airliner in September 1983. The Soviet Air Force allegedly confused flight KAL 007 with a United States Air Force Boeing RC-135 electronic intelligence aircraft which was doing its regular ferret operation in the same area. Aerial Espionage is a revealing book about the secret reconnaissance flights carried out by the Soviets and the West since the beginning of the Cold War. Between the first furtive illegal crossings into forbidden airspace over the Iron Curtain and the recent American spy flights above Nicaragua, a fascinating and unknown world exists.

Very Good in Very Good Dust Wrapper. Gently faded at the spine with a short, closed and tidy, tear to the head of the rear panel join. Text complete, clean and tight.

This book will be listed, sooner or later, for £6.50 on my delightful website… (added to my Military Air Force category.) but get 50% off buying from my blog… below… 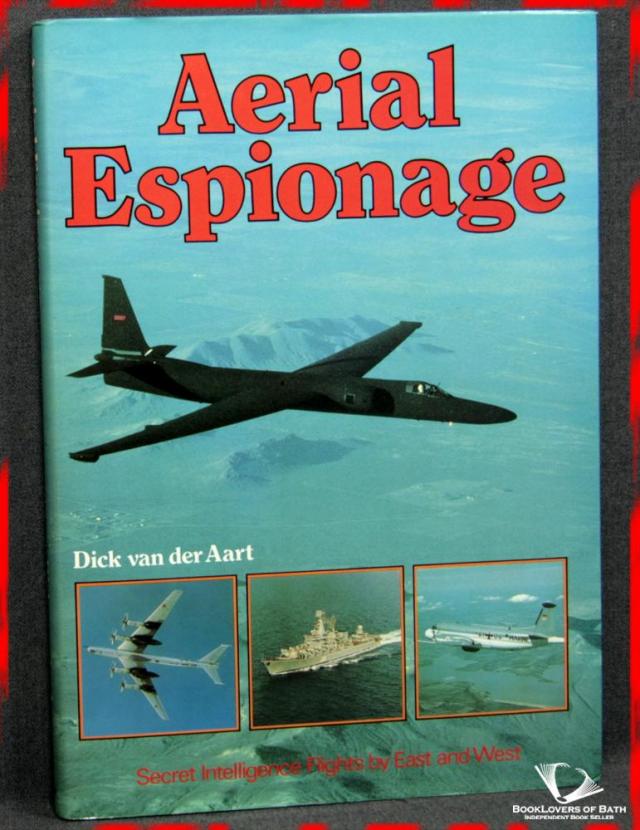