Of Men and Manners: The Englishman and His World by Katherine Feldberg

Of Men and Manners: The Englishman and His World by Katherine Feldberg lands on the |> SALE <| shelves in my shop.

From the cover: The effect of the Channel, first and foremost, is to make it difficult and unpleasant to get into this country, and equally difficult and unpleasant to get out. Consequently, Britain has never been a pleasure resort. The only people who cross the Channel in large numbers for pleasure are the British themselves, who, having no other road by which to go anywhere, have in desperation hardened themselves to the idea, and have even come to take a perverse pride and pleasure in the asperities of the Dover-Calais passage.

This bit of insight into the effect of British geography on the British character was written by Dorothy Sayers, a witty and sensitive writer who has a great deal more to say about the English in “The Gulf Stream and the Channel,” which appears in this book. She is only one of the many excellent writers whose clever and insightful comments on the British people are contained in Of Men and Manners. The glittering roster of contributors includes G. K. Chesterton, Winston Churchill, Leonard and Virginia Woolf, D. H. Lawrence, J. B. Priestly, George Bernard Shaw, Aldous Huxley, E. M. Forster, John Galsworthy, Joseph Conrad, A. A. Milne, and many others.

Katherine Feldberg, the compiler, has done a superb job of selecting writings that cover a wide range of English thinking on every conceivable subject. History, politics, sex, the weather, social conventions, literature-all are discussed and explored here in delightful fashion. Of Men and Manners is the perfect book for any non-British reader who desires an entertaining and enlightening look at the English character.

Very Good in Good Dust Wrapper. A little rubbing to the edges of the dust wrapper. Heavily faded at the spine with a small sticker scar. Text complete, clean and tight, but with a “file copy” stamp to the first blank.

This book will be listed, sooner or later, for £6.50 on my delightful website… (added to my Social History category.) but get 50% off buying from my blog… below… 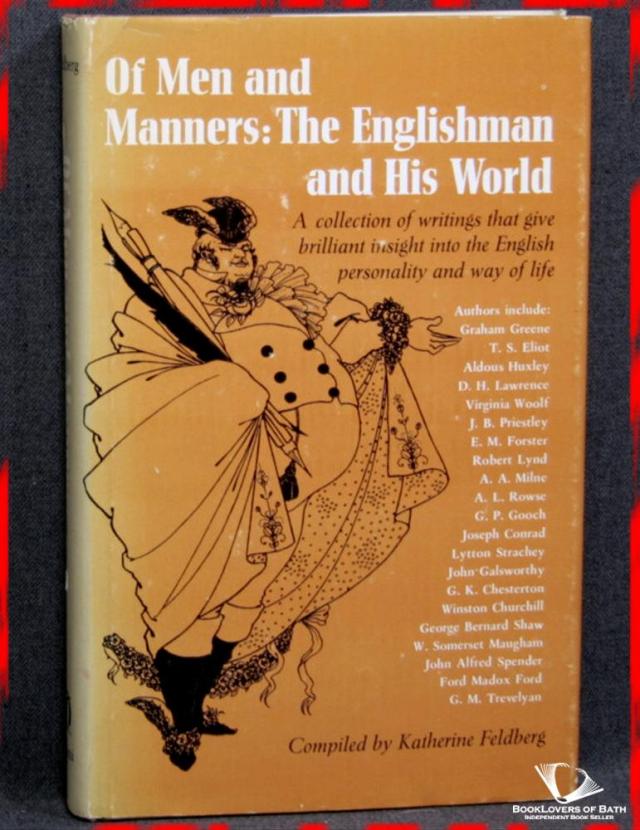