Lord’s and Commons: Cricket in Novels and Stories by John Bright-Holmes

Lord’s and Commons: Cricket in Novels and Stories by John Bright-Holmes hits the £1 shelf in my shop.

From the cover: Cricket is unique among sports in that it has inspired a whole range of literature and, above all, has been more fully described in fiction than any other game.

Those who maintain that cricket is a metaphor not only for life in England but life anywhere, will find countless episodes in novels and stories to bear out their thesis. But most readers do not have the time to seek out the cricket episodes in writing that has dealt with the game more or less since cricket became a national pastime.

Therefore John Bright-Holmess selection is a must for the cricket lover. He has ingeniously divided the subject into three sections. Lords and other first-class occasions deals with the first-class game, concentrating on Test and County cricket, and has a dramatic opening with stories by Jeffrey Archer and lan Peebles, and classic extracts from Ted Dexter and Clifford Makins, the Frys, and George Macdonald Fraser.

Willingly to school has the inevitably heroic games of childhood and adolescence, perhaps the most moving of them all, ranging from Talbot Baines Reed and P. G. Wodehouse to E. W. Hornung, the mordant wit of Brian Glanville and the touching innocence of R. K. Narayans rural Indian M. C. C.

The village green and other commons deals with the very roots of the game and includes J. L. Carr, the Australian Dal Stivens, the completely un-omittable A. G. Macdonell and Hugh de Selincourt, and the work of such novelists as L. P. Hartley, George Meredith and Charles Dickens.

The book concludes with Gerald Brodribbs invaluable checklist of cricket in fiction so that Lords and commons combines the value of a reference book with superb reading matter for the summer game (particularly when its raining) and the winter days and nights when one dreams of watching and playing but has to take up a good book instead.

John Bright-Holmes has previously compiled The Joy of Cricket, described by the Listener as a complete pleasure1 and by the Mail on Sunday as a gem of a book as leisurely and full of drama as a five-day Test.

Very Good in Good Dust Wrapper. Dust wrapper snagged at the head of the spine.

This book will be listed, sooner or later, for £6.50 on my delightful website… (added to my Anthology category.) but get 50% off buying from my blog… below… 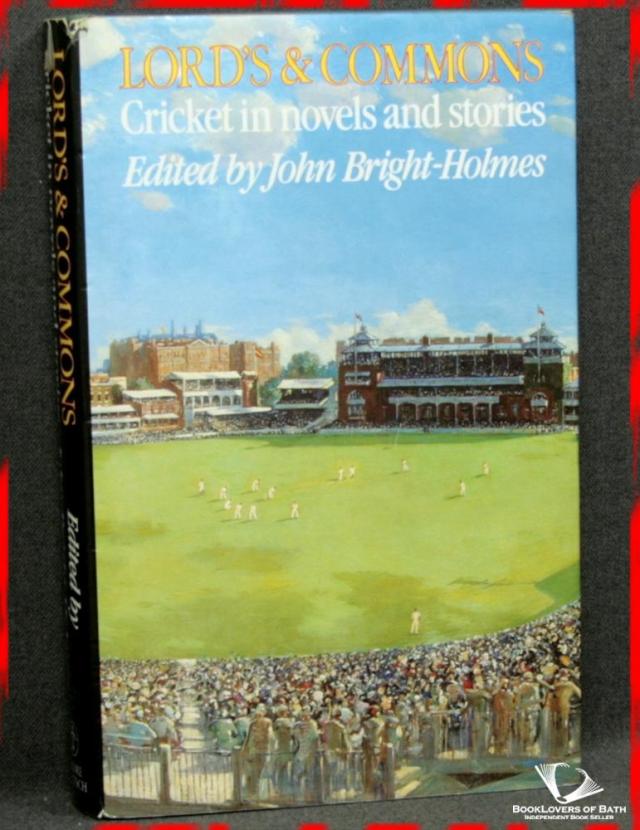