Rum Jungle by Alan Moorehead hits the £1 shelf in my shop.

From the cover: Mr. Moorehead left Australia in 1936 and has lived in England, Italy and France ever since. He recently returned on a trip and this is an account of his re-discovery of his own country. He travelled through the almost uninhabited territory in the North region which is half as big as the U. S. A. and describes this weird country of kangaroos, tree pythons, aborigines, and vast cattle stations. He visited Rum Jungle. the recently discovered uranium mine which may turn out to be the richest in the world. He lived for a while on the Great Barrier Reef, the huge platform of coral that runs for 1,000 miles along the North-East coast of Australia, its tropical waters full of fantastic fish and monsters of the deep.

Mr. Moorehead deals with things that few Australians themselves have seen: a rocket range in the deserted interior where guided missiles are shot off into the stratosphere; country where wild buffalo roam on the Arafura Sea; the bush fires, the floods and the droughts which sometimes devastate areas half the size of England.

The principal theme of the book is the sudden appearance of modern science (the rockets, uranium) in an antediluvian region which has never yet been really civilised by white man. Without any intervening history, this huge empty country, which few people know about, is being projected into the atomic age.

Rum Jungle is an adventure book about a part of the world of which little has been written and little is known. Readers of the Italian sketches in The Villa Diana will know what a flair Mr. Moorehead has for discovering the unusual in his travels and how vividly he writes of strange places and odd characters. Rum Jungle will add to his already great reputation.

Good in Good Dust Wrapper. Unlaminated dust wrapper a little edgeworn and faded with nicks at the spine ends. Leans. Gently bruised at the head, tail and corners of the binding. Edges of the textblock heavily spotted. Previous owners’ inscription to the first blanki. Pages lightly age-tanned, more heavily to some leaves. A good reading copy.

This book will be listed, sooner or later, for £6.50 on my delightful website… (added to my Travel Australia category.) but get 50% off buying from my blog… below… 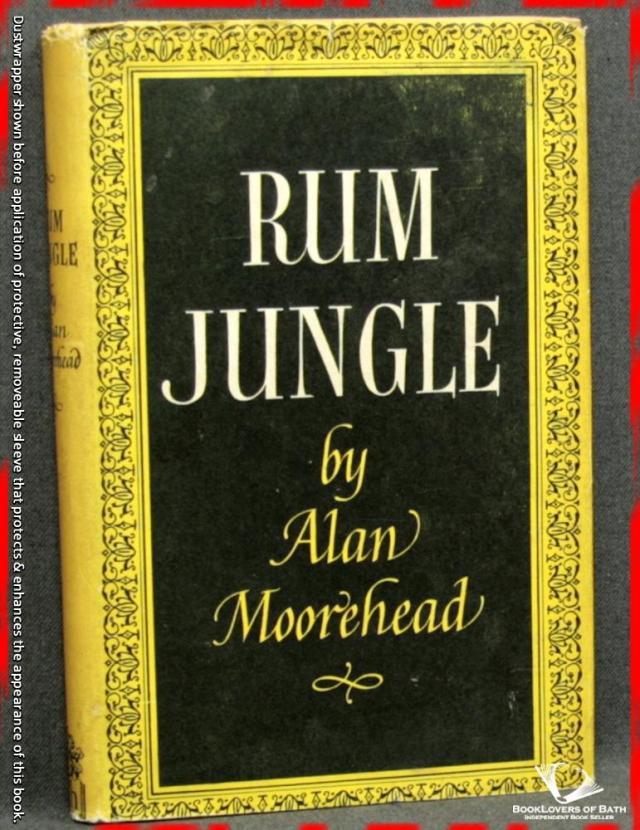 The world's leading book dealer in Peasedown St. John.
View all posts by BookLovers of Bath →
This entry was posted in BookLovers of Bath: The Shop! and tagged alan, and, australia, description, moorehead, northern, observations, personal, territory, travel. Bookmark the permalink.